"Join other families and students to learn more about how to safely bike in Arlington. The event is a Bicycle Show & Tell and will be a great opportunity for both experienced and inexperienced bicyclists to learn more about bike safety, bike maintenance, and the wide variety of choices when it comes to bikes. Among other things, we will have: --Bike display to show off your own bikes --Bike swap to exchange bikes and other gear for more properly fitting gear --Bike maintenance lessons --Bike safety lessons --Bike and gear displays from local bike shops --Safe Routes to School information --Bike registration with Arlington County Police Department --Pre-event Kidical mass ride. Where: Washington-Lee Cafeteria When: Sunday, April 6, 12-2 PM For more information visit www.apsva.us/Domain/4329"
at 2:19 PM No comments:

It's Your Fault: You Havent Brought Up the Subject of "the Intersection of Doom" Recently! @arlingtonva #bikedc #arlingtonva

Arlington County apparently responded that the reason solving the Intersection of Doom was not part of the Realize Rosslyn plan is that no one had brought it up recently.

Let's go to the video tape.

The Intersection of Doom is on the County Bike Map as a known dangerous intersection.

Arlington County Board Candidates get asked how they would solve the problem of the Intersection of Doom.  Here is the statement of Alan Howze and John Vihstadt.

The Arlington BAC has listed it as a priority concern.

The Bike Arlington Forum has "Fix Intersection of Doom" as its largest tag (until the tags were reset). 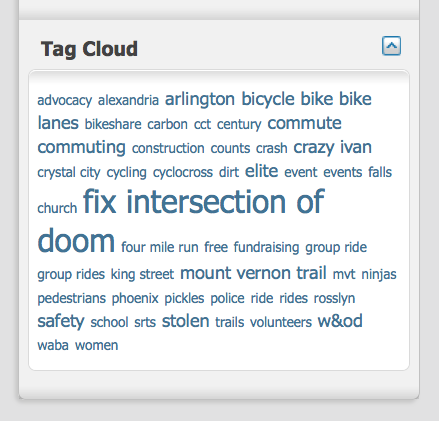 This is a map of bicycle accidents in Arlington, from 2010 to 2012.  It clearly shows a problem at the Intersection of Doom.

There was a Greater Greater Washington article about it.

Arlington, can you please tell me how we have NOT BROUGHT THIS UP RECENTLY?
at 9:15 PM No comments:

Email ThisBlogThis!Share to TwitterShare to FacebookShare to Pinterest
Labels: Intersection of Doom 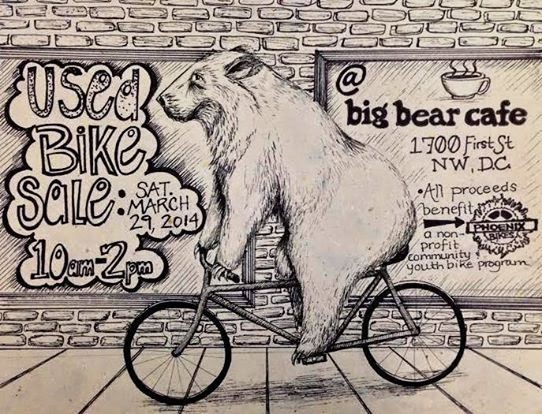 Phoenix sez "Don't forget, the Big Bear Bike sale is just around the corner and so is spring...we hope! It is, don't worry. In addition to the refurbished bikes, we'll have some new accessories for sale. Floor pumps, u-locks, cable locks, locking wheel skewer sets, hand pumps, tire levers, patch kits, light sets, and inner tubes. If you have a special request, give us a buzz or drop us an e-mail and we can order in time for the sale. We'll have a limited supply of the items mentioned above, so remember, the early bear catches the salmon!"
at 12:03 PM No comments:

I move in Arlington in 1989, 25 years ago.  I moved into a group house of ultimate frisbee players in the Ballston area.  One of the big features of moving into a house in Arlington... I could bike to the Ultimate Frisbee games on the Mall.

A lot has changed in 25 years.  You would not recognize Ballston and Clarendon.  One thing hasnt changed.  One of the worst cycling intersections in Arlington has always been The Intersection of Doom.  For at least 25 years (that is, as long as I can remember), cyclists have proclaimed "Fix the Intersection of Doom!"  And for 25 years, nothing has happened. Every now and again, someone gets our hopes up with false claims of solutions.  But nothing gets done.  Arlington paints more bike lanes, paints more sharrows, puts up more bike signs - in its quest to be certified as a Gold Bike Friendly Community - but it doesnt fix one of the greatest problems facing Arlington bike commuters.

The Intersection of Doom is the intersection of N Lynn Street and Lee Hwy, with four lanes going north over Key Bridge, and three lanes going west off of I-66 onto Lee Hwy.  Two of these west bound lanes can turn right onto Lynn St towards Key Bridge.  They can do this "Right Turn on Red" even though there are lots of pedestrians present and even though this is a known dangerous intersection.  The area of this intersection is controlled by Arlington County, VDOT (the Commonwealth of Virginia), the National Park Service, the District of Columbia (due to the old boundaries of Arlington), and a private land owner.  These FIVE jurisdictions have created a quagmire where no solution is viable.

The Intersection of Doom is inexcusable.  Is it hard to negotiate with five jurisdictions?  Yes.  But that's what political leadership is called.  We dont elect our leaders to do easy jobs ~ we elect them to resolve difficult and challenging jobs.  The fact that this is a hard problem is just no excuse.

Now comes along "Realize Rosslyn," a major planning effort currently underway to guide Rosslyn's development for the next 20 or so years.Rosslyn has been studying, discussing and planning with a great deal of effort and has produced a draft Plan Framework. It's a pretty great plan.

What it doesn't have is any policy about fixing the Intersection of Doom.

That needs to change.

A fundamental need for Rosslyn, and for Arlington, is to Fix the Intersection of Doom. How bad is the problem?  Check out the tag cloud from the Bike Arlington cycling forum.  Arlington cyclists want this fixed. Until Arlington gets the political muster to fix one of its most dangerous cycling (and pedestrian) intersections, it should not apply for or receive the Gold Bike Friendly Community certification.

PS:  This is an excellent article on the Intersection of Doom by Chris Slatt in GGW