My Favorite Rides: Visiting George on the MVT (Part III) 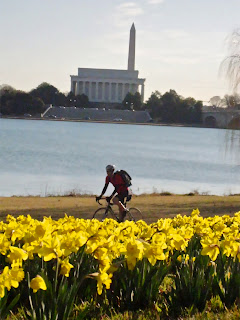 The last ride I will tell you about is the Mount Vernon Trail.  This trail starts at Roosevelt Island, near the base of Rosslyn, and follows the George Washington Parkway south to Mt. Vernon.  It is a very popular, relatively flat trail with many delightful features.  It can be crowded and a little narrow, and is frequented by visitors who do not necessarily know trail etiquette, so prudence and caution is called for (as always).  The trail follows along the Potomac in Washington where you can see kids on their crew boats, cranes standing near the river shore, and the occasional bald eagle.  The trail then winds south around the airport, where many folk like to sit in Graverly Point and watch the planes take off.  South of the river, the trail goes through the Washington Sailing Marina, where portions of the trail become boardwalks winding through wetlands.  From here the trail enters Old Town Alexandria, a marvelous destination for lunch (be careful that stop signs are strongly enforced along the bicycle route).  South of Alexandria, the trial goes under the Wilson Bridge and into Jones Point Park.  From here you get the feeling of leaving the city, as the trail winds through nature, wandering through the Belle Haven Sailing Marina, the Dyke Marsh Wildlife Preserve, and Fort Hunt.  In time, off in the distance, you will see your destination, the home of our First President, Mt. Vernon.  In total, the distance from Roosevelt Island to Mt. Vernon is approximately 17.5 miles.  The more adventuresome can continue along a series of bike lanes and paths to scenic Mason Neck State Park.  Bike Washington has an excellent guide to cycling on the Mt. Vernon Trail.

WABA has a collection of trail maps and guides.  Three local touring clubs are Potomac Pedalers, DC Randonneurs, and the Oxon Hill Bicycle and Trail Club.
at 12:52 PM 1 comment:

In Northern Virginia, a treasure of recreational and commuting cyclists is the Washington & Old Dominion Regional Park trail.  A splendid example of a successful rails-to-trails project, the trail follows the path of the old Washington & Old Dominion Railroad, also known as the W&OD (or "WOD" to cyclists).  Construction on the WOD started in 1855 with the goal of connecting Alexandria to Harper's Ferry. Railroad companies rose and fell as they struggled to make a successful venture. One branch line took D.C. residents to far off destinations such as Great Falls.  In 1968, bowing to economic realities, the railroad company collapsed and sold the land to Dominion Power (which runs high power lines along the right of way).  Six years later, the City of Falls Church formed an agreement with Dominion Power and opened up the first portion of the W&OD trail.  By 1982, the Northern Virginia Regional Park Authority had purchased the W&OD from the power company.   The trail was completed in 1988, running from Shirlington in Arlington, out west through Falls Church, Vienna, Reston, Herndon, Ashburn, Leesburg, and finally to Purcellville, 45 miles away. 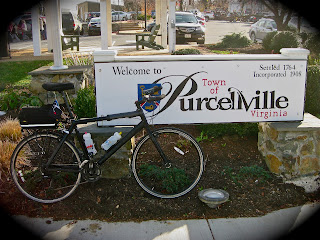 The WOD is a very popular path that offers broad trails, wonderful destinations, and scenic vistas.  In Arlington, the WOD forms a bike beltway, connecting with the Custis Trail, and the Mount Vernon Trail, making it a tremendous resource for commuters. Over the years, I have spent a lot of time on the WOD walking dogs, geocaching, roller blading, and cycling.  But I had never made it to Purcellville!  Last Fall, my son's high school had a championship football game out in Ashburn and I grabbed my chance.  After driving him to the game, a traversed over to the trail, venturing on the final leg of the WOD that I had not ridden.  This was the end of the football season, which means it was late Fall.  The colors were tremendous.  In Ashburn along the WOD is one of cyclist's favorite destinations, the Carolina Brothers Pit Barbeque. Not far west of Ashburn you are treated with an amazing view of the Lucky Stone Quarry, and then cross the bridge at Goose Creek.  The trail is largely straight and level as you head west, permitting you to glide through the country-side. I reached Leesburg in short order and recognized portions of the trail from my previous C&O trip.  You continue past Leesburg, with the WOD following near the Harry Byrd Highway.   I reached Purcellville, and acquired my trophy: a picture of my bicycle next to the Purcellville sign.  Purcellville is a delightful town with, of course, an excellent bike shop at the end of the trail, great restaurants, and a number of 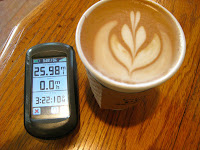 antique shops.  I returned down the WOD to Leesburg where I stopped in the historic district for the best cup of coffee I think I ever had.  Then back to Ashburn and to the kid whose football game was just coming to a close.

Excellent information about the WOD can be found at the Friends of WOD website.
at 6:50 PM No comments:

Washington D.C. has become a marvelous area for bicycle touring. A weekend ride can take you to magnificent places.  It can take you to the shores of the Chesapeake Bay, a town that helped spark the Civil War, or to the home of our First President.

So what are my favorite rides?  Here are three (from a very long list):

As you may recall, Washington D.C. is the furthest up-river navigable point on the Potomac.  This led to the ports of Georgetown on the north side and Alexandria on the south side.  It also led to a competition of how to move goods inland from those ports.  On the north side, investors built the C&O Canal and railroads, and on the south side, the Washington & Old Dominion railroad.  These 19th Century endeavors to move goods created long stretches of continuous land that became marvelous parks.

Three summers ago my son and I packed up the bikes and cycled out the C&O Canal to Harpers Ferry.  The towpath along the canal starts in Georgetown and can take you to Cumberland.  From Cumberland, you can now pick up the Great Allegheny Passage rail-to-trail and bicycle all the way to Pittsburgh! The park service operates canal houses along the way that can be reserved for primitive lodging.  There are lots of campgrounds and hotels along the way. 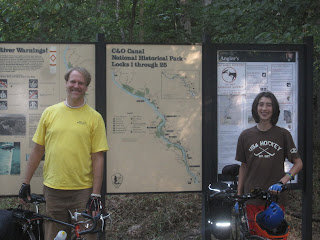 Our trip took us from Great Falls to Harpers Ferry, a marvelously scenic route.  Within about two miles, my teenage son had turned to me with enthusiasm and asked if we could do this every summer. Traveling along the C&O towpath is a bit of a journey through nature and history. At Seneca Creek we saw turkey vultures. We passed Block House Park, home of a Union Civil War encampment whose mission it was to protect the C&O, but whose conditions were so muddy that one Lieutenant commented "We are in the worst camp we have ever had. It is in a hollow, where the dampness collects ..."  The first day we crossed the Potomac at Whites Ferry (the only operating ferry on the Potomac) during a cold thunderstorm, and stayed the night in Leesburg. The next day we returned to the towpath, and biked passed an Olympic kayak training center at the Dickerson Generating Plant. The place where the power plant returns its cooling water to the river was converted in 1991 into a kayak course simulating the Olympic course in La Seu d’Urgell, Spain.  We passed Point of Rocks and stopped in Brunswick, where an old church has been converted into the Beans in the Belfry coffee house.  After coffee, we continued on to Harpers Ferry where we spent the rest of our trip white water rafting on the Shenandoah.

Biking the C&O is an affordable vacation and great exercise.  There is a useful online guide to the C&O canal called Bike Washington's C&O Canal Bicycling Guide.
at 6:46 PM No comments:

The Arlington Bike Forum is reporting a violent mugging on the Custis Bike Trail (which goes along 66) near Glebe Road. This report is by a cyclists at 10 pm.

This is the second such report of a violent mugging on the Custis, the other was during the day.
at 10:41 AM No comments:

Two Wheel Tuesdays - brought to you by Bike Arlington

Two Wheel Tuesdays are back in Arlington! Here's the grime from Bike Arlington:

Learn everything you need to know about biking in Arlington!  Our Two Wheel Tuesday meetups run every Tuesday night from 7:00pm to 8:30pm and will cover three different topics.  No bike is required to attend this meetup!  This is a casual and fun way for you to get the information that's specific to your needs to get you started biking or to help get you biking more often.

If you ever felt a little nervous about changing lanes to make a left hand turn in the road, we'll teach you the best and safest way to do that.  If you wanted to know how to carry your groceries home, we got you covered.  And if you aren't quite sure about how to get from home to work, we'll help you with that too.  So please, come prepared with questions and we'll make sure (or at least try really, really hard) to answer all of them!  Sign up (for free) on meetup.com (or just show up)!  If you bring a friend who doesn't currently bike, you will be entered into our raffle to win sweet prizes (Bike messenger bag anyone? How about an annual Capital Bikeshare membership?).  So please, spread the word and bring a friend!

Each meetup will cover one of the following topics:
Savvy Cycling Tips: Learn the best tips on safe biking so you can ride in traffic comfortably
Bike Types & Gear: Get expert advice on selecting the right bike for you and the best gear for your bike riding needs
Routes & Directions: Figure out how to get where you want to go by bike and learn about the best routing tools to help you get there
Spring & Summer Schedule for 2013