How I Beat Asthma by Bicycling

Okay, first of all, you dont beat Asthma.  You control asthma.  Asthma sucks.  Anyone who has it can tell you how it feels like having an elephant sit on your chest. 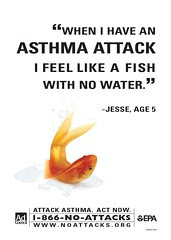 I was diagnosed with asthma as a kid.  I was allergic to cats. Fine with me; I didnt really like cats.  Had these knock out pills I took any time I had an asthma attack.

Life went on.  I grew old.  And then maybe 12 years ago, my asthma went terrible.  Went from never using my inhaler to using it multiple times a day.  The doctor I went to see said that technically I was dead - that's how bad my lungs were.

The doctor had me take an allergy test; I failed the test.  I was allergic to everything (well, at least I reacted to everything).  Doctor said I was a disaster.  He gave me a big bag of powerful medicine and put me on monthly allergy shots.

Life went on. And I didnt get better.  I am one of those guys who always ask questions.  Whenever an allergy / asthma doctor was on the radio, I would listen.  I read a lot.  I listened a lot.  And I paid attention to myself.

And I didnt get better.  And I asked my doctor, I said, "you know, you have been treating me for a long time, and I havent gotten better.  What is the deal?"  He said I should come in for more testing.

And finally I had enough.  I stopped all of medications; I stopped the allergy shots; and I did three big things:

Triggers:  I paid attention to my triggers.  And though I did not want to admit it, my trigger was a hockey locker room.  I cant tell you what it was.  Mold.  Bacteria in bags that were never emptied.  Just general stench.  But hockey rinks made triggered me.  I stopped going in hockey rinks; I stopped having allergic reactions.

Salt: I was sitting at a party.  And it turned out the guy I was sitting next to was a doctor.  I am not the type to hit people for free advice, but he was offering it.  He asked, "is there a time you ever feel good."  I said yeah, at the beach.  He hit me upside the head.  "Salt water through your sinuses.  Get your sinuses clean and you will feel better."  I started using a neti pot.  Yeah, its weird.  But it is great to have clean sinuses.  It has been huge help. I feel like I can breath. 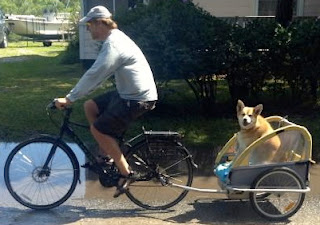 Cycling: I had not yet controlled my asthma but at this point I was doing a good job.  I was looking for something else to get me all the way home.  I listened on the radio to someone talking about using yoga to help control asthma.  The person said yoga is effective because of the breathing, which increases your lung capacity.

If you have asthma, it is on you to take responsibility, and work this out with your doctor.  Asthma is a serious medical condition.

Dont be satisfied with being ill - ask questions and listen to smart people.  If your doctor isnt making you well, consider getting a different doctor. Change your lifestyle.  Keep a journal and see if you can figure out your triggers.  Most importantly: Live healthy - really healthy (get enough sleep, eat good foods, take your vitamins, get away from pollution).  Experiment with a neti-pot. Finally, consider exercise; make your lungs healthy by using them.
at 6:35 PM No comments:

UPDATE:  VaDOT tweeted "Crews are cleaning up the debris and our Bridge Team is on its way to the site."

Tip of the Hat to VaDOT and ArlingtonDES who are always VERY responsive.
-

Concrete appears to be falling off of the Hwy 66 bridge over Lee Highway in Lyon Village, Arlington.

This is from the sidewalk on the north side of Lee Hwy, underneath the bridge.  Concrete is on the sidewalk, the bikepath, and the road.  Some of the chunks on the sidewalk are about the size of baseballs - if a cyclist hit these coming down the sidewalk they would likely flip.  There are other chunks up on the embankment that are as big as footballs.

This is a dangerous situation.  I swept as much of the concrete as I could off the sidewalk and up to the side; no guarantee that more wont come down. 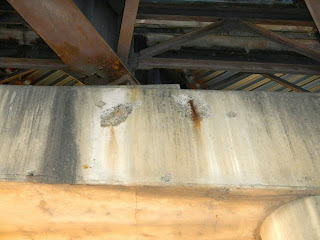 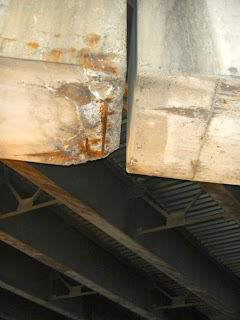 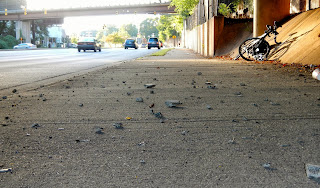 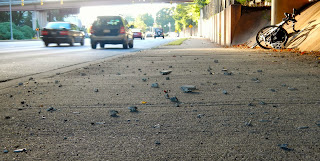 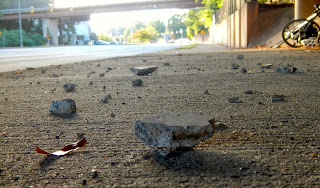 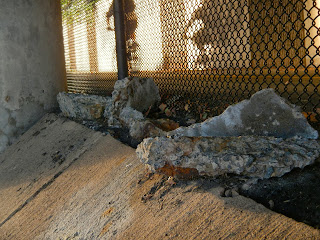 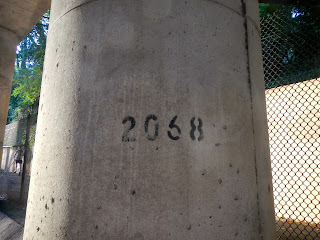 A report has been filed with VDOT here. And it has now been reported to Arlington DES.
at 8:19 PM 1 comment:

Email ThisBlogThis!Share to TwitterShare to FacebookShare to Pinterest
Labels: Cherrydale 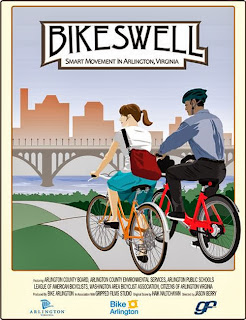 BikeArlington invites you to the exclusive movie premiere of the "bike-umentary" of the year. BikeSwell - Smart Movement in Arlington, Virginia features local bike advocacy rock stars and highlights the triumphs and tribulations of making Arlington a premiere bicycle friendly community!


Date: Thursday, October 10thTime: 7pm - 9pmLocation: Arlington Cinema & DrafthouseRSVP: bikeswellmovie.eventbrite.com
Tickets are free but a $5 donation to the non-profit organization, Phoenix Bikes, is strongly suggested. With event assistance from the Arlington Bicycle Advisory Committee, the feature presentation will be followed by a panel discussion so you can learn more from some of the people involved in Arlington's "Smart Movement": There will be prizes raffled off after the film, donated by BikeArlington, the League of American Bicyclists, WABA and New Belgium Brewery. Phoenix Bikes has generously donated a bike that will be raffled off as the Grand Prize!
BikeArlington, in partnership with the Arlington Bicycle Advisory Committee, presents the "bike-umentary" of the year: BikeSwell - Smart Movement in Arlington, Virginia.

This film features local bike advocacy rock stars and highlights the triumphs and tribulations of making Arlington a premiere bicycle friendly community. The feature presentation will be followed by a panel discussion so you can learn more from some of the people involved in Arlington's "Smart Movement":

Hey Bike Orgs..... it's CFC time again... are you participating?

During last year's Combined Federal Campaign, it did not seem like bicycle organizations woke up to the campaign until well into it (and by that time fed employees had already decided who to give to). Well, its CFC time. If you are a bike non profit and you participate in CFC, NOW would be a very good time to announce that fact, provide you CFC number, and explain why people should give to you.I mean, I'm just saying....(I will try once again to compile a list of participating bike orgs, and circulate it)
at 9:42 AM No comments:

Yet we remain a destitute neighborhood lacking service coverage. According to bikeshare best practice literature, a CABI station should be within 1/3 mile of its target audience.  And within 1/3 mile of 12th and D St we have exactly... NO STATIONS.  We are surrounded by stations.  All too far away to be effective.

Hell, they even installed a 2nd station up on Independence ave before they gave us coverage.

Hey CABI.  For a birthday present, can we talk about bringing a station down to 12th & D St SW.

Thanks. Happy Birthday anyway.
at 3:11 PM No comments:

A public meeting will be held on Wednesday, September 18 to discuss proposed bike lanes for King Street between Russell Road and Janney's lane in Alexandria.
When: Wednesday, September 18. 7:00 pm
Where: Maury Elementary Cafeteria, 600 Russell Road
The City of Alexandria is proposing to narrow the moving lanes to provide traffic calming and install bicycle lanes in both directions. These will connect to the King Street Metro to the new bicycle lanes installed on Janney’s Lane, as called for in the City’s Pedestrian and Bicycle Mobility Plan, and will require parking removal on that section of King Street.  Do to the removal of parking we expect a lot of opposition.

On Monday, September 23rd, Alexandria’s Traffic and Parking Board will review proposed bike lanes for King Street between West Cedar Street and Janney's Lane.
When: Monday, September 23, 7:30 pm
Where: Council Chambers, City Hall, 301 King Street
The decision on this rests with the Transportation Department, with the advice of the Traffic and Parking Board. Thanks to all who have already contacted the Alexandria City Council. That helps our elected leaders understand the breadth of support for this important proposal.

A poll on whether people want the bike lanes.
at 8:28 AM No comments:

This video was tweeted by our good friends at Bike Arlington.  When I ride home up the Custis Trail up Lee Hwy, I regularly like to race the 3 bus up Lee Hwy to Glebe Road.  I almost always win.

To quote the keepers of the rules:

Here's your opportunity for N+1 from Phoenix Bikes

BikeArlington is hoping you can help BA out with a new project BA working on:

BikeArlington wants to do a new style of map and we want some community input. We’ve put together a short 3 minute survey and are going to be giving out a Kindle Fire to one respondent and need help spreading the word to non-bikers. Regular bikers and commuters like yourselves are good too and we're not trying to exclude anyone, but we don’t have as much trouble getting reaching the regulars.

Here it is: http://www.bikearlington.com/survey
at 8:33 PM No comments: